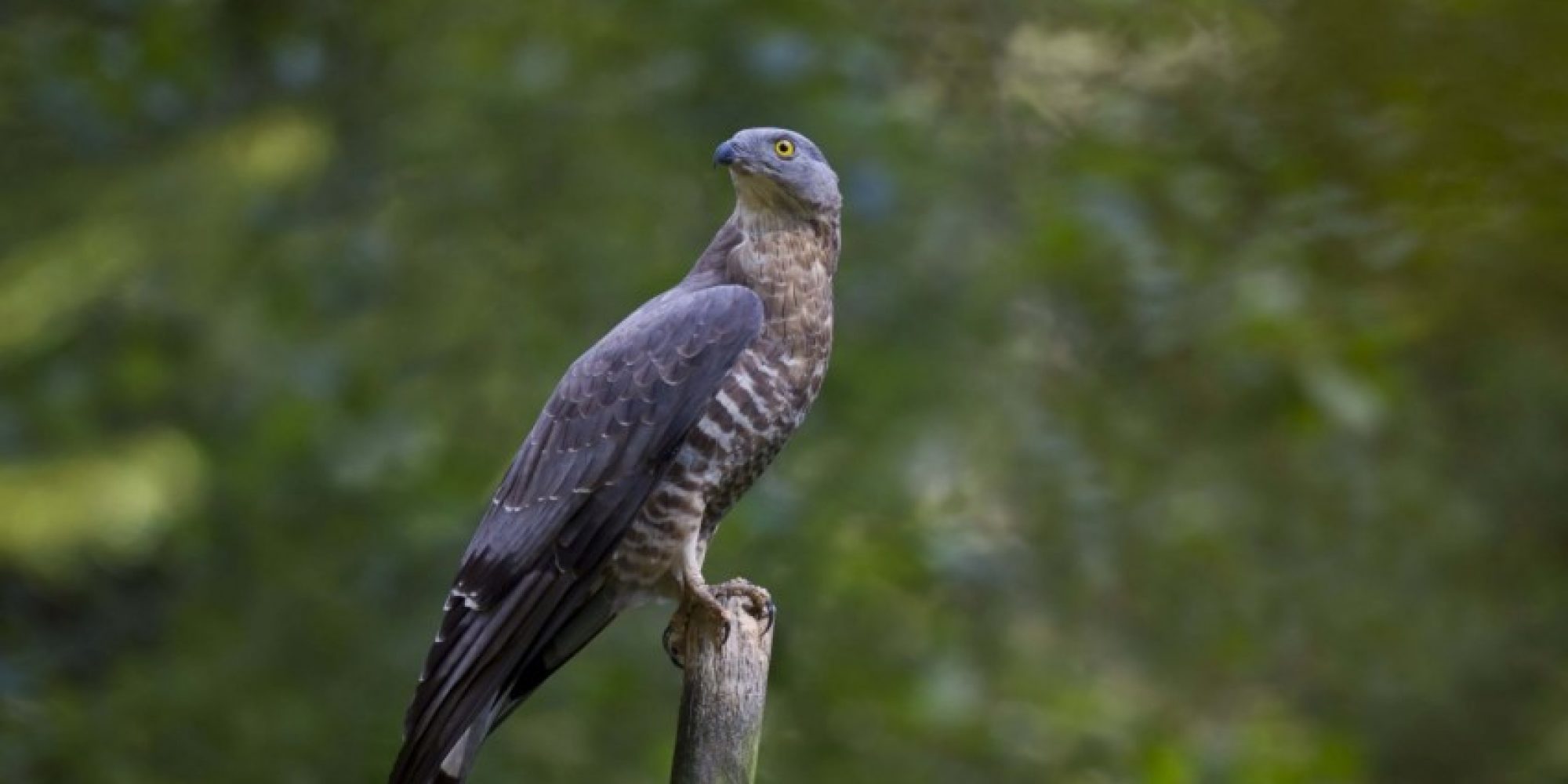 The European Honey-buzzard is fearless in the face of stinging wasps and hornets – but it has no defence against illegal shooting for sport. In Italy, “anti-poaching camps” sparked an extremely successful movement, which has saved thousands of honey-buzzards.

The European Honey-buzzard is one of seven flagship birds in our Flight for Survival campaign to raise awareness of the scope and scale of the illegal killing of migratory birds.

The European Honey-buzzard Pernis apivorus is a bird of contradictions. Despite its sugary name, it doesn’t eat honey. Its main food isn’t even bees: it relies more on the larvae of wasps and hornets. Shifting up and down its perch and bobbing its head from side to side, it uses its needle-sharp vision to spot the stinging insects and follow them back to their nest. Here, it unsheathes its long talons, disembowelling the nest and often carrying it whole to the forest floor to plunder it further.

The European Honey-buzzard has some fascinating adaptations which allow it to nonchalantly shrug off a barrage of stings. A natural armour of scale-like feathers protect its head, and it is also thought to have a chemical deterrent coating its plumage. It’s a tough lifestyle, but no other bird does it – in fact, it is the only known predator of the Asian Giant Hornet. Any wasp-haters out there who call wasps “useless” can gain comfort from the fact that they provide a hearty meal to this majestic raptor.

But its diet isn’t the only contradiction. The European Honey-buzzard isn’t a true buzzard, either: it is actually more closely related to kites. The similarity of its plumage to the Eurasian Buzzard Buteo buteo, especially in juveniles, is instead thought to be an intriguing case of mimicry. In order to ward off the predatory Northern Goshawk Accipiter gentilis, the European Honey-buzzard may ape the appearance of a stronger, tougher species.

The final contradiction comes from the “European” part of its name, since the species doesn’t stick to just one continent. Instead, it overwinters in tropical Africa, making its way to Europe to breed. On migration, this usually solitary species flocks together, using the earth’s magnetic field to orientate itself – supplemented by an incredible visual memory for landmarks and the ability to take advantage of winds. Like the White Stork Ciconia ciconia, it diverts around the Mediterranean Sea, which does not create thermals suitable to glide on. Instead, flocks funnel themselves over the narrowest sea crossings, such as the Gibraltar Strait and the Messina Strait.

It is here that they become easy targets for poachers, who shoot down staggering quantities of migrating birds for fun. The Messina Strait, on the southern tip of Italy, was once one of Europe’s worst “blackspots” for the illegal killing of raptors. In fact, as many as 5,000 Eurasian Honey-buzzards were unlawfully killed there every year. But back in the 1980s, something incredible started happening.

LIPU (BirdLife in Italy) had the innovative idea to hold “anti-poaching camps”, whereby volunteers from all over the world would travel to the area to keep watch over the migrating birds. Their presence alone deterred many poachers, but volunteers were also quick to report any illegal killing incidents they witnessed, aided by the National Forestry Corps. The first years were intense, with threats, physical aggression, shooting to police vehicles and helicopters, and even a bomb destroying Lipu’s local office, but eventually the continued effort to fight unlawful activity paid off.

Thirty years later, they are still going – but they’ve brought in others, too. Over the years, the presence of the camps has changed local attitudes, and now members of the community work alongside volunteers to protect the birds that pass through their area. Furthermore, LIPU and their volunteers have developed a monitoring network that provides the police with advance information on where the ‘waves’ of raptors will be landing – allowing them to be present in the right places at the right time.

The result has been extraordinary. The number of honey buzzard casualties per year have gone from 5,000 to only 100, and it has been estimated that at least 85,000 Eurasian Honey Buzzards would have died over the past three decades if poaching had not been addressed.

It’s an inspiring tale of hope, showcasing the power of collaboration – but the story hasn’t ended yet. Across the rest of Italy, illegal shooting is still rife. LIPU is now looking outwards, planning to expand this success to tackle the illegal shooting and trapping of Eurasian Skylarks Alauda arvensis and quails in Puglia, or the unlawful trapping of Eurasian Blackcaps Sylvia atricapilla in Sardinia. There are also plans to support local livelihoods by promoting this area as a birding tourism destination. We’ve seen what’s possible, and with your help, we can give other species the sweet taste of success.

Help the European Honey-buzzard and other migratory birds by supporting our Flight for Survival campaign, which follows the journeys of seven flagship species and highlights the work of our Partners in combatting illegal killing along their route.