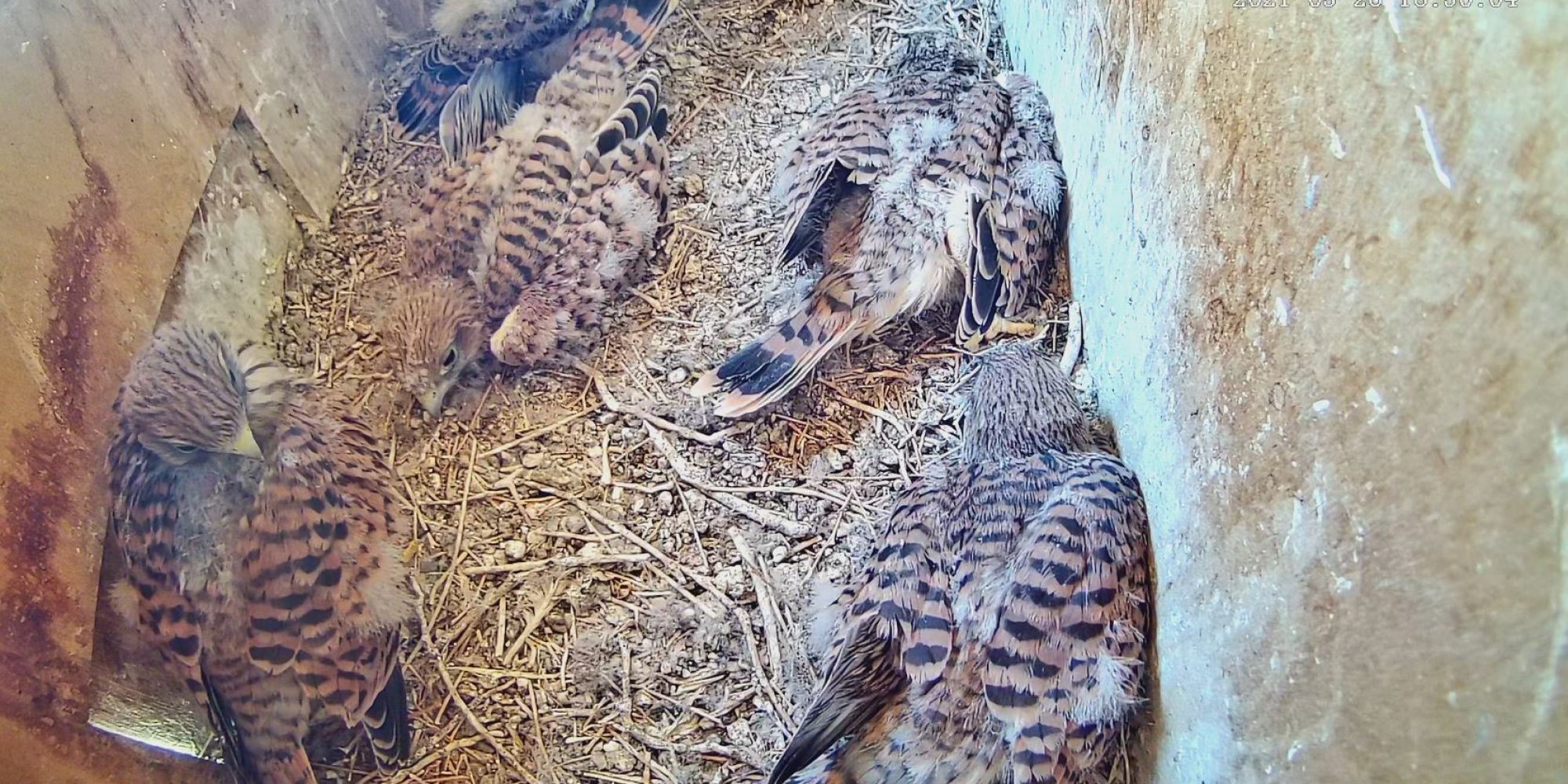 As we saw in the last episode, from the moment they hatch, Common Kestrel chicks need around a month in order to fully develop their wings and tail feathers. The eggs were laid towards the end of April, and hatched at the beginning of May. Unfortunately, one of the chicks did not make it, and we are left with five growing kestrels.

Yet just twenty days after hatching, they are unrecognizable! The Kestrel chicks are now almost the size of their father, as they anxiously await their food every day. We can see the size comparison as the male kestrel swoops into the nest, much to the joy of the yelping chicks, and drops some food into a hungry beak. Although their fluffy backs were starting to develop black and grey streaks, the soft white feathers on their wings gave away their young age. Young doesn’t mean helpless, though, as we see a feisty one swallowing a lizard, completely whole! As the days progress, the brown markings become more distinct, and the white downy feathers start slowly disappearing. Not a week passes and we start seeing really how much these ‘chicks’ are starting to resemble capable, adult Kestrels! Their brown and beige feathers, and spotted tails, really begin to stand out in the midst of their white fluff. Not yet being able to spread their wings, they sit resting around the nest, sometimes preening themselves and each other.

About 30 days after hatching, all five of them were still in the nest box huddled close together, just like they used to when they were little white balls of fluff. Their soft, white fluff was all but gone. This was one of the last occasions when we saw them all together! Having grown into able birds of prey, they used their newly developed wings to start leaving the nest. A female stayed behind and was visited by another kestrel, presumably one of the siblings. As it flew in, white feathers billowed around the nest box, reminiscent of the times when they were tiny chicks, just a few weeks back. One of our most recent videos, from June 4th, shows the young female kestrel, sleeping in the nest box. She, too, will likely leave soon, to take on the wilderness around rural Larnaka!

During the first year of life, the mortality rate is high for kestrels, but past that age, they can live up to 16 years or more. We hope to see many of them soaring through the skies in the months to come!