What has ‘Blue-blue-blue-metal’ been up to? 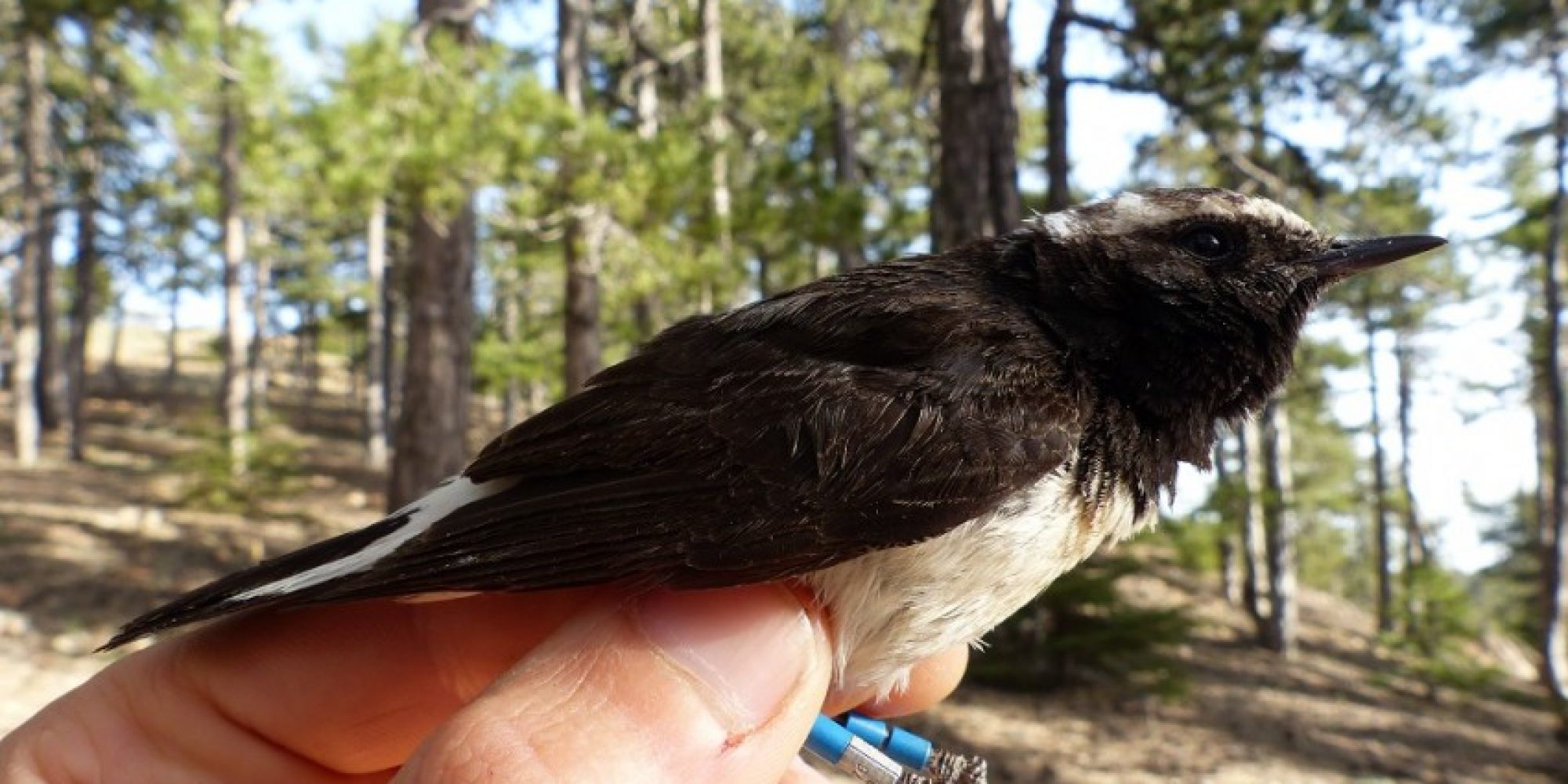 Although endemic, Cyprus Wheatears are migratory and every autumn they travel to countries like Ethiopia, Sudan and Eritrea to spend the winter, before returning to us in spring again to breed. Robert Patchett, a PhD student at the University of St. Andrews, is studying the migratory patterns of the species and tells us where Blue-blue-blue-metal, one of the birds he ringed and retrieved, has been.

The winter seemed to last until the beginning of May this year up in Troodos, with some bitterly cold early mornings spent searching for our colour-ringed Cyprus Wheatears. The colder weather and lasting snow cover delayed nesting by a few weeks compared to the last two years, but by mid-May there were a number of nests with full clutches of five eggs, and some females still building nests.

If you go for a walk around the Artemis trail area of Troodos you might well spot a colour-ringed Cyprus Wheatear. We have 123 colour-ringed birds at the fieldsite, and it’s likely that there are a few more to find. There are two rings fitted to each leg, and this allows us to individually identify the birds by sight. The rings are read in order from the bird’s point of view as: left-upper, left-lower, right-upper, right lower. For example, the female in the picture above is ‘blue-blue-blue-metal.’

As well as colour-rings, some of our birds carry geolocators. These are very small and lightweight tags that allow us to study migration. We can find out when individual birds leave Cyprus and arrive at their wintering grounds in autumn, and then when they leave and arrive in spring. They also help us to build a picture of their winter range. Blue-blue-blue-metal was first caught in 2017 and has carried a geolocator on her past two annual migrations. In 2018, she arrived back in Cyprus on the 2nd of April after leaving her wintering grounds near the border of Sudan and Ethiopia 10 days earlier. We have recovered that tag she carried for her most recent migration and will analyse the data later in the year after our fieldwork has finished.

◄ One of the geolocators that were recovered this spring. This one has a female Cyprus Wheatear’s first migration © Rob Patchett

By comparing the very first migrations of juvenile birds against their following migrations as experienced adults, I hope to further our knowledge of how migration changes with age. The Cyprus Wheatear is an ideal species to investigate this question, because the juveniles have much higher return rates compared to most other small migrant bird species. This year we have seen 55 of 186 birds that were ringed as juveniles last year, which is quite amazing since not only do they have to survive their first ever annual migration cycle, they also disperse away from where they were born in the previous year. In many species, survival and dispersal of juveniles tends to limit our ability to track their migration, particularly in smaller birds like the Cyprus Wheatear where the tag must be retrieved the following year to download the data.

For the Cyprus Wheatear, we stand a good chance of finding the first year birds by increasing the fieldsite from two to five square kilometres. Having said that, each tagged bird still requires a lot of effort to find. Adult Cyprus Wheatear on the other hand are much easier to follow since they generally return to the same territory each year. In fact, our oldest bird is a male (red-red-orange-blue) who was born in 2012, and has returned to the same territory each year since.

If you see a colour-ringed Cyprus Wheatear please make a note of the colour and position of the rings on each leg, when and where you saw the bird, and then send the record to me at rbp3@st-andrews.ac.uk. You are most likely to find one in the Troodos area, but a few birds might move further afield, and these records would be extremely interesting.